ShakespearePlaysPlus is a freely available digital text corpus of William Shakespeare’s plays. The 37 plays were compiled from the Oxford University Press 1916 Edition of “The Complete Works of William Shakespeare” and annotated by Mike Scott for his own research in 2006. The plays are organized in three categories according to their type, i.e., comedies, historical plays and tragedies. The speeches of all characters have been extracted into separate text files. The text files are marked up in a pseudo-XML style and stored in Unicode. The corpus is downloadable as an extractable zip-file. This review presents a detailed look at the text corpus, its creation and composition. ShakespearePlaysPlus is compact and marked up with essential information, making it a durable, portable and easily reusable resource.

1ShakespearePlaysPlus is a freely available digital text corpus of William Shakespeare’s plays. The original source is the Oxford University Press 1916 Edition of “The Complete Works of William Shakespeare (The Oxford Shakespeare / OUP)”.1 The corpus was compiled, processed and annotated by Dr. Mike Scott2 for his own research in 2006. The source texts were collected from the Online Library of Liberty (OLL) in digitized form, are in the public domain and “may be used freely for educational and academic purposes”. The corpus is available for download and re-use as a zip-file on the WordSmith Tools website3 under “Extra downloads for WordSmith Tools”. Information concerning the origin of the text corpus, its design, contents and format is presented on the ShakespearePlaysPlus download page.

2This corpus provides a complete digital text collection of all of Shakespeare’s plays in standardized modern spelling, in a durable format that can easily be reused for further research. It can be used for analysis and research within the WordSmith environment or with any other lexical analysis tool. This primary source collection can be understood as a ‘general purpose corpus’, open to many possibilities for reuse and adaptation depending on the focus and interest of the user, ranging from literary to linguistic and quantitative as well as qualitative research.

4Basic relevant documentary information regarding format and design is presented in a pop-up link on the same page. The text files are stored in 16-bit Unicode format.6 The zip-file is 5.4 MB large and unzips to 24.3 MB on the computer. It contains 41 file folders and 1387 files altogether. 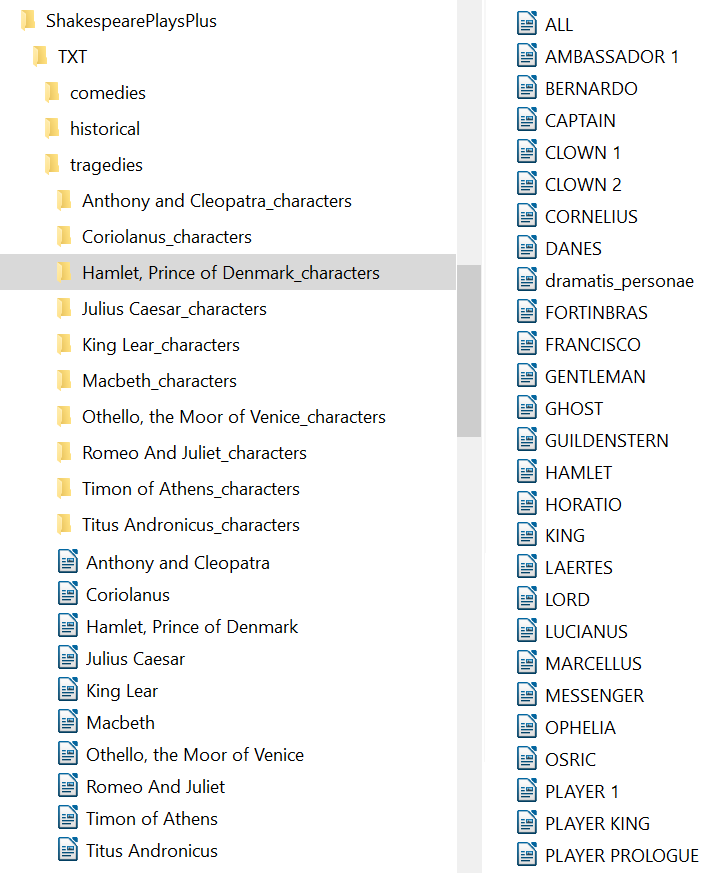 5The composition of this collection is guided by the principle of completeness, i.e., the complete plays of Shakespeare.7 The 37 plays provided in the 1916 Oxford edition are organized according to three main categories, namely comedies, historical and tragedies. The plays and the respective “character speeches” sub-folders are available at the root level of each category folder.

6The 1313 extracted speech files are listed alphabetically in separate, accordingly named, sub-folders, e.g., “Hamlet, Prince of Denmark_characters” (see Fig. 1). A plain text alphabetical listing of each play’s characters is included in the character speech folder, i.e., “dramatis_personae”, providing an overview of the play’s characters. These files reflect the Dramatis Personae listing at the beginning of each printed original play, however, they differ a bit from the source version in that they do not include further character descriptions (e.g., Friend to Hamlet, a Soldier, Officers, Courtiers, etc.) and some of the characters are listed more specifically, e.g., Clown 1 and Clown 2 instead of ‘two clowns’ as in the OUP.

7The contents of the corpus provide what they promise, as described on the website. The structure of the data storage is clear and easy to understand. The simple structure makes it easy to integrate and reuse the text files in other systems.

8The text files include embedded annotations in the form of “pseudo-XML angle-bracketed tags”.8 The annotations reflect the structure and contents of the play. Further analytic information not included in the HTML source texts in this form has been added, namely percentages indicating the relative position of the text segment9 within the entirety of the play.10 The percentages are based on the number of tokens altogether.

9Each play consists of a single text file. Following the basic markup structure of HTML/XML,11 each act, scene and character speech, as well as extra angle-bracketed stage directions, are surrounded by opening and closing angle-bracketed tags. Speeches are indented, making them easier to read while maintaining the visual form of standard HTML/XML. Each speech tag also contains the bracketed percentage information within the first line.

Example 2: Excerpt from the play file at the beginning of Hamlet.

10In comparison, the character speech files are annotated without opening and closing brackets, deviating from the pseudo-XML style. The annotation at the beginning of each segment consists of the angle-bracketed number of the speech, act and scene, as well as the relative percentage information regarding the position within the play, as can be seen in the following:

11Overall, the data model is simple and easy to understand; however, the style of markup would make certain conversions necessary for reuse with XML-technologies. It is interesting that the creator specifically chose to model the texts in this manner, i.e., that the XML-version created during the transformation process was not used (see below). But considering that the corpus was originally created for personal research in WordSmith, by default ignoring angle bracket pairs and their content,12 this markup style serves perfectly well. This markup style privileges speeches,13 i.e., blending out all the lines starting with angle brackets leads to a text consisting only of the speeches.

12Besides essential information, i.e., the original book edition, the source of the digital texts and the final encoding, not much is told on the Wordsmith website regarding the creation and format of the original data and the transformation process behind this corpus. Upon my request, Mike Scott very kindly provided more detailed information, which is reused here with permission.

13The 37 plays were downloaded individually in HTML, having “the merit of having detailed style information”, as can be seen below:

Example 4: Sample excerpt of source HTML from OLL, A Midsummer Night’s Dream. The original markup thus distinguishes the name of the character speaking from the lines spoken (class=”ital_speaker”) and marks the line numbers in the OUP edition (“milestone_right”). 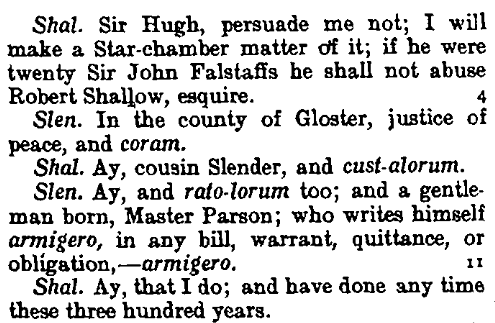 Fig. 2: Lines 1 to 13 of The Merry Wives of Windsor from OUP, with line numbering and italics

Fig. 3: Lines 5 to 13 of OUP in HTML presentation, italics and line numbering as in OUP

14The HTML versions were converted to XML using Dreamweaver MX 2004. A program was written to convert the XML into plain text (TXT) with the desired markup. For this, it was necessary to

The final output is shown below:

15As can be seen above, some information was dropped from the OLL markup during the transformation into TXT format, i.e., the line numbering of the OUP and the markup reflecting the OUP pages (e.g., [52] for p. 52 of OUP). The cursive writing in the speeches is also not marked up in the TXT versions, as can be compared in the following examples (all from The Merry Wives of Windsor, see Fig. 2, 3, 4 and Ex. 6, 7).14

Example 6: Lines 5 to 13 of OUP in ShakespearePlaysPlus, without line numbering and italics.

16In the OUP, stage directions within speeches are marked with square brackets and italics, as in Fig. 4. These are visually reproduced within the OLL and marked up in the HTML.

17In the play files of ShakespearePlaysPlus, the target markup replaces the square brackets with angle brackets and surrounds these with <STAGE DIR> tags, as below.

18Some deviations – which have been corrected – occurred during the original transformation, however. The more relevant ones concerned 13 speech segments where in-speech stage directions resulted in lines of speech text being surrounded by angled brackets, enclosing 32 speech lines altogether, e.g.: 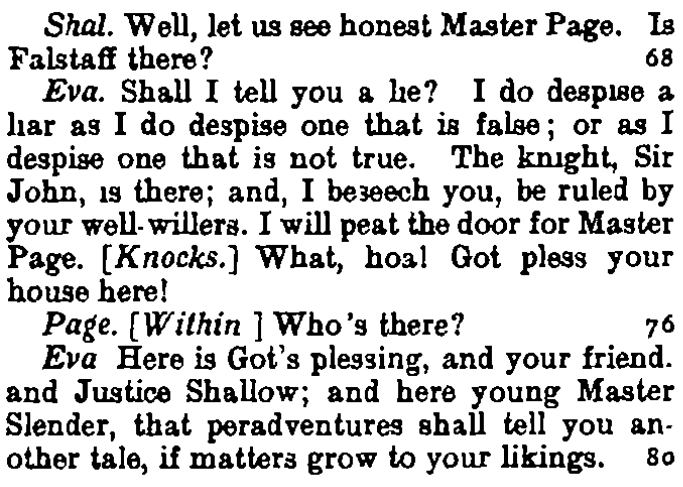 19In the single speech files, the 32 enclosed speech lines of the play files did not show up at all, thus deviating from the original OUP content and resulting in a loss of information.17 Mike Scott set about correcting these deviations as soon as I informed him of my findings. The corrected version is now online for future downloads.18

Example 9: Metadata from the Hamlet play file. The metadata are not repeated in the single characters’ speech files. A date of creation is not provided, but the entire corpus was created in 2006.19

21As the basic format of the text collection is 16-bit Unicode,20 it is a durable corpus21 that is readable, processible and accessible for the long term. No specific user interface is provided or necessary. This corpus consists of plain text files, so a basic editor or text program can in principle suffice for human reading. For specific research questions, WordSmith or any other tool that works with annotated text files can be used as an interface. Whether the format or markup have to be adapted depends on the environment, e.g., for use with XML-technologies, the markup would have to be adapted to be well-formed (see footnote 11).22

22The text collection has brief documentation regarding source, format, annotation and design on the website. The original source of the collection, as well as creator, contact and download website address, are provided in the metadata of each of the plays. There are no persistent identifiers. The original source texts are in the public domain and no specific license is in use.

23Due to its simple and durable design, this text corpus has good prospects of being available for research and reuse for a long time. Continuous access is provided by the WordSmith Tools Website. The website entered its 22th year of existence,23 so one may be optimistic that it will remain online well into the future. The corpus is not officially mirrored or archived in an academic repository, but it is archived at the WayBackMachine Internet Repository.

24Regarding reuse, at least one author has used this corpus as a basis for her MA thesis investigating key word clusters in the dialogue of Shakespeare’s female characters.24 Scott does not have additional records of people or projects using this corpus, but expects that “quite a lot of students will have downloaded it for their term papers”.25

25ShakespearePlaysPlus is a practical text collection that is open for many potential reuses. Important aspects behind the creation of the corpus were completeness, durability, reusability and standardized modern English spelling. The markup reflects the structure of the play (act, scene, stage direction, speeches of characters), and the relative position of the speech tags. Considering more complex data models and current standards of research data management, some modifications could possibly be undertaken, e.g., adapting the metadata (adding distinct IDs/DOIs and creation dates, including the metadata in the speech files) and the markup to be well-formed XML.

26There is no particular theoretical stance behind the text corpus, at least not explicitly, but a special interest in the analysis of speeches may be presumed. As Mike Scott writes on the website, “I made this version for my own research. If you use it please let me know!” And further in personal correspondence, “I thought others might find it useful, no other great ambition!”.

27ShakespearePlaysPlus is a durable and portable text corpus marked up with relevant information. Making this practical corpus created for personal use available to the public for further reuse and research was a collegial and friendly deed in the spirit of open access, adding to the pool of digital resources available for linguistic and literary Shakespeare research.

Factsheet of this project

You can use the running numbers on the left side to refer to a specific paragraph.

XML of this review, including formal evaluation data
PDF

corpus analysis (2) english (8) Shakespeare (1) text collection (14) theatre (3)
We use cookies to get an idea about what's going on on our website. If you continue to use this site we will assume that you are happy with it.OkRead more